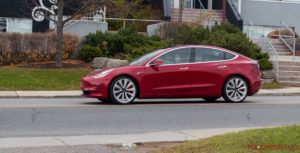 The onboard camera might be used for something else other than seeing who is at fault in a car accident.

According to Tesla Owners Online, the U.S. patent office recently granted Tesla a patent for learning the number of occupants onboard a car using an onboard camera system.

Entitled the “Personalization System and Method for a Vehicle Based on Spatial Locations of Occupants’ Body Portions,” Tesla submitted its application on Dec 6th, 2018.

The new approach to doing headcounts also brings room for other functions. In the background section, it seems that Tesla is contemplating an in-vehicle personalization function that tailors the surroundings to each occupant accordingly.

For example, the system may adjust in-vehicle creature comforts like zoned climate control, massage function, seating position, where the speakers are pointed, or the colour of the ambient light based on one or more predefined commute profile. As the vehicle integrates itself into the lives of a household, it would know who is who and what to do automatically.

According to the claims section, the system could also double as a safety feature that senses medical emergency and automatically navigates the car to a preferred medical center.

Nevertheless, the smarter personalization option also raises profound privacy concerns because it relies on storing and analyzing biometric data. As more and more vehicles become interconnected with the web, protecting personal privacy could develop into a challenge that car manufacturers and lawmakers need to address.

The post Tesla secured a patent to determine the number of occupants in a car and more appeared first on MobileSyrup.