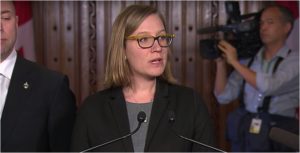 The Government of Canada has set out the requirements needed to implement the Critical Election Incident Public Protocol (CEIPP), which is set in place to inform the public if an incident that threatens the upcoming election has occurred.

The CEIPP will look at the threshold that determines whether an incident has impaired Canada’s ability to have a free and fair election. The government says that determining whether this threshold has been met will “require considerable judgment.”

The CEIPP will be administered by a panel that includes the Clerk of the Privy Council, Ian Shugart. It will also include the Nation Security and Intelligence Advisor, Greta Bossenmaier, the Deputy Minister of Justice, and Deputy Attorney General, Nathalie G. Drouin.

The first step in the protocol for a public announcement would providing the panel with the information of the potential threat. The Canadian Security Intelligence Service and the Royal Canadian Mounted Police would then consult to determine how to address the interference.

Canada’s Democratic Institutions Minister Karina Gould felt “prepared” that the current legislation will protect Canada from disinformation in the upcoming federal election, during an interview with MobileSyrup.

It is also worth noting that two of Canada’s security establishments have revealed that foreign actors are attempting to influence the upcoming federal election.

The post Government of Canada details steps to inform the public if there is election interference appeared first on MobileSyrup.