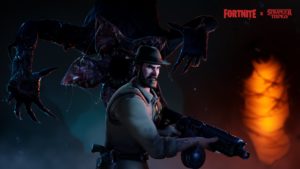 Fortnite’s latest crossover is with Stranger Things, a Netflix horror TV show that just premiered its third season on the streaming platform.

According to the official tweet, the new content update allows players to dress like Chief Hopper or the Demogorgon in Epic’s Battle Royale game. There is also a new weapon skin called ‘Wines.’

The gate has been opened.

Get the new Stranger Things set from the Item Shop now including the Chief Hopper and Demogorgon outfits and Vines Wrap! #FortniteXStrangerThings pic.twitter.com/q8OhyWnWdW

It’s important to point out that the new outfits are not free. Chief Hopper costs 1,500 V-Bucks, while Demogorgon skin costs 1,200 V-Bucks. Epic didn’t provide a price tag for the ‘Vines’ weapon skin.

Unlike the previous John Wick and Avengers: Endgame collaborations, the latest event does not bring a special game mode.