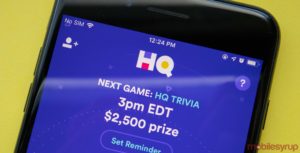 HQ Trivia has been suffering from a steep decline in downloads over the past year.

The mobile game show saw 827,000 downloads between January and June, down 92 percent from the 10.2 million reported during the same period last year, according to analytics firm Sensor Tower.

Now, TechCrunch is reporting that HQ Trivia has laid off 20 percent of its staff. According to sources, this brings HQ’s headcount from 35 to 28. As noted by TechCrunch, the LinkedIn profiles of the laid-off employees note that they worked in HQ’s HR, marketing and product engineering departments.

RT and reply with your username for a chance to win a free year. #wordseveryday

The layoffs also follow several months of turmoil at the company, according to TechCrunch. Following the death of HQ co-founder and CEO Colin Kroll last December, co-founder Rus Yusupov took over and has reportedly been difficult to work with. TechCrunch sources also say Yusupov hasn’t made much of an effort to make changes to the app in an effort to renew its popularity.

As a result, a majority of staffers reportedly signed a letter to HQ Trivia’s board asking for Yusupov removal, although for some reason, it never ended up getting sent. What’s more, Yusupov supposedly discovered the move against him and fired the two leaders of the petition, which led to the exit of HQ Trivia’s senior vice president of brand partnerships and its marketing manager. The dwindling number of downloads coupled with Yusupov’s leadership are said to have caused significant drops in morale.

Recently, HQ announced that it will only run regular HQ Words games on Tuesdays and Thursdays.

Instead, the company is planning to launch a $9.99 USD/month ($13 CAD) subscription that offers daily games with “bigger prizes” and “more ways to win.”

Further details weren’t confirmed, although it’s no doubt an additional monetization method for HQ beyond sponsorships and in-app purchases.

The post HQ Trivia downloads down 92 percent during the first six months of 2019 appeared first on MobileSyrup.