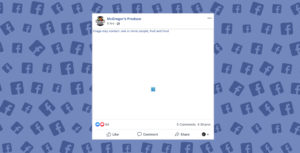 Instead of pictures, some users are seeing blank squares with a description of what is in the photo, or at least what the social network’s AI thinks is located in the photo.

Facebook has been using AI to tag photos since April 2016, according to The Verge, but we’ve never seen how it labels images until now.

For example, I follow a farm that I worked for in the past and one of its pictures now says, “image may contain one or more people fruit and food.”

The Verge also notes that the social network tags pictures with the names of the people in them. Facebook has been tagging people automatically in photos with facial recognition since 2017.