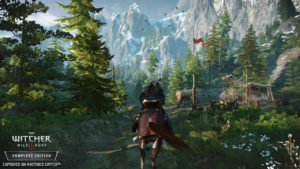 In response to a user’s inquiry, The Witcher’s official Twitter account said the Nintendo Switch version of the Witcher 3 runs at 540p in handheld mode and 720p docked with dynamic resolution.

Dynamic resolution means the game may drop the resolution to maintain playable frame rates when necessary.

In comparison, Sony’s PS4 and PS4 Pro version of the Witcher 3 runs at a native 1080p and a massively upscaled (1920 x 2160-pixel resolution) 4K resolution respectively, says Digital Foundry. Moving onto Microsoft, the Xbox One S takes the Switch route and runs the game at between 900p and 1080p dynamically. The Xbox One X can run at a true 4K with 30fps.

But gameplay resolution is not the only downgrade. The official trailer shows a significant downgrade in graphics quality compared to that of the PC and home console versions.

But for the Nintendo Switch with a dated Nvidia Tegra X1 chip, the fact that it can run The Witcher 3 is impressive on its own.

The official Twitter account also said the Switch port will contain all expansion packs and 16 DLCs. The entire game comes in at around 32GB when it releases in 2019.

There is no cross-save support, so you can’t have everything, but if you’re a Witcher fan playing again on a mobile console is still appealing.

Participating retailers in Canada should take pre-orders by now.