Google’s Game Builder lets you make your own video games 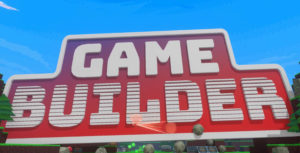 If you’ve ever wanted to make a game, but don’t know how, Google’s got a tool for you.

Birthed out of its workshop for experimental projects, Area 120, new prototype game ‘Game Builder’ offers the ability to create your own games inside a simple Minecraft-like environment.

Google says the platform is for those that “have an idea for a video game” but have no experience in coding or 3D art.

Game Builder provides a drag-and-drop world and game designer based on blocks and cards. Blocks form the environment you’ll play in while card-based code snippets will control the behaviours of things in the game. For example, users will “answer” questions, like ‘How do I move?’ by dragging an appropriate card over and dropping it under the question.

Additionally, users can find and import graphics for characters and the environment from Google’s Poly platform, which hosts an open library of free VR and AR assets.

On top of all this, Game Builder allows users to collaborate in real time with other users. This can look like multiple people building a level together, or a user playtesting as others make the level.

The whole thing reminds me of Alice, a similar tool for introducing people to code and 3D environments. I had the opportunity to use Alice when I was in high school, and while it wasn’t intended for making games, I have fond memories of pushing the platform to its limits to create games.

It’s worth noting that Google’s Area 120 launched Game Builder on Steam in November 2018, but hasn’t said much until now with the release of version 2.0.

You can learn more about Game Builder here or head over to Steam to download it for free on Windows or Mac.

The post Google’s Game Builder lets you make your own video games appeared first on MobileSyrup.