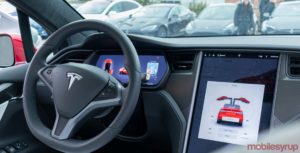 At an odd E3 event, Tesla CEO Elon Musk sat down with video game publisher Bethesda’s game director Todd Howard and during the interview indicated that YouTube will be making its way to Teslas.

Youtube is likely an app that a lot of Tesla drivers have been waiting for and they’re going to have to keep waiting since the CEO didn’t reveal a release date for the entertainment app, according to The Verge.

While Musk has been advocating for games to come to Tesla’s dashboard system for a while, with the likes of indie game Cuphead and a few retro Atari games, we’ve now seen Fallout Shelter and the mobile game Beach Buggy Racing 2 at the event.

Publications are reporting that these games won’t be playable unless the car is in park and it seems likely that YouTube will operate in the same way.