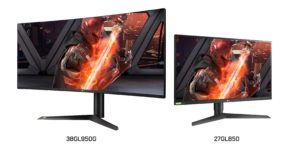 The smaller 27-inch 27GL850 has a 1440P (2560 x 1440) IPS panel with a native 144Hz refresh rate. Designed to work with AMD Radeon GPUs, the monitor supports Freesync for a much smoother gaming experience when frame rate fluctuate. However, that doesn’t mean LG wants to cast Nvidia users aside. The 27GL850 is G-Sync Compatible, meaning green team users can take advantage of Freesync as well.

Other specs include HDR10 support and a versatile monitor stand that comes in the box.

However, both LG monitors come with a rudimentary VEGA Display HDR 400 certification. The press release says nothing about the new monitors’ backlighting system. Given that, it is possible they lack the Full-Array-Back-Lighting(FALD) system that minimizes the annoying ‘halo’ effect when displaying HDR content.

LG says pre-orders for the 27-inch variant starts on July 1st in the US but gives no price. There is no word on price or availability of the 38-inch model.