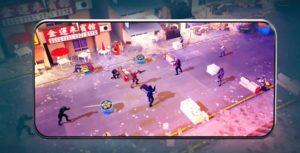 The game is available for pre-registration now, and it looks like some kind of real-time tactical shooter for mobile.

There isn’t much news out there yet about the game yet, but we can confirm that it will be available on both iOS and Android.

The game is going to be free-to-play and you can pre-register on the company’s website to get a free character from the upcoming Tom Clancy’s Ghost Recon Breakpoint.

As you play you’ll be able to upgrade both your heroes and their gear to gain an edge over your opponents.

There are two multiplayer modes. A PvP mode where teams can challenge each other and another team-based mode called ‘Guild Wars.’

Finally, there is a campaign where players can once again fill the shoes of iconic Tom Clancy characters to save the world.