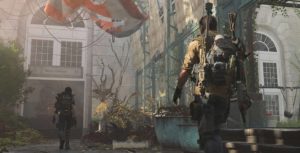 Ubisoft has announced that the film adaptation of its acclaimed third-person shooter franchise The Division is coming to Netflix.

The film will be directed by David Leitch (Deadpool 2, Fast and Furious Presents: Hobbs and Shaw) and star Jessica Chastain and Jake Gyllenhaal.

No release date was confirmed for the film.

The post Ubisoft announces ‘The Division’ movie for Netflix appeared first on MobileSyrup.