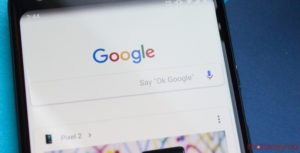 Google has rolled out ‘dark theme’ in the Discover feed and Search widget for beta testers using Google app version 10.4, according to 9to5Google.

Before delving into how the new colour theme appears, those rocking beta version 10.4 can proceed to the app’s Settings, tap ‘General,’ scroll down and see if they can find the dark theme option.

At first glance, Google’s definition of a dark theme is more like a dark grey than pitch black. Toggles appear to have a darker blue colour as well. Aside from changes in menus, each card in the Discover page seems to carry a lighter grey than that of the background. Google wants to maintain useful visual cues for users to see what they want, especially after the entire user interface joins the dark side.

At least on an original Pixel XL running Android Q beta, the Discover page will automatically follow the Q system-wide dark theme even if there is no dedicated toggle to do so in the Discover settings. Without tinkering with my device any further, the Google Search app retains its white colour theme, even when the system is set to dark.

However, according to screenshots taken by 9to5Google, an updated Google Search interface will display headlines and page names in a shaded blue to stand out from the white/grey texts.

The publisher also says the colour theme update for the Google app version 10.4 beta is a server-side update, meaning that not everyone gets to go to the dark side even if they have the correct software version.