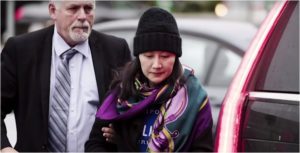 Huawei CFO Meng Wanzhou’s extradition case will likely run until October 2020, based on plans set forth by both the defence and prosecution during a court hearing on June 6th.

The South China Morning Post reported that one of Meng’s lawyers said that it would be “a record” if the court made a decision within two years.

“We expect to be comprehensive, complete and as fulsome as you will expect of us,” David Martin told the court on Thursday.

“These are our best estimates at this time,” he said, noting that this will be the most “tightest, most aggressive” scheduling of proceedings.

The prosecution agreed with the terms as well on Thursday.

The case would determine whether or not Meng would be extradited to the U.S. to proceed with a case involving 13 counts of bank and wire fraud charges that were laid on her, Huawei and subsidiary Skycom. Huawei denies all allegations, which have yet to be proven in court. Meng was arrested in December in Vancouver.

Both defence and prosecuting lawyers “broadly agreed on a January 2020 start to the committal hearings,” the South China Morning Post reported, but the associate chief justice has yet to agree to this date.

The associate chief justice did note that based on the scheduling of both sides “the extradition hearings would finish in October 2020, with a ruling afterward.”