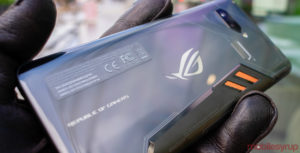 Asus has announced that it is partnering with Tencent Games to develop the ROG Phone II. Tencent Games is a China-based gaming publisher responsible for PlayerUnknown’s Battlegrounds (PUBG) on mobile and Arena of Valor.

“We are very pleased to have this opportunity to work together with Tencent Games on the next iteration of the ROG Phone,” said Asus co-CEO S.Y. Hsu in a press release. “The combined software and hardware expertise that Tencent Games and Asus respectively bring to the table has allowed us to reach beyond anything we could have imagined.”

Asus didn’t mention any information about the phone’s release date or its specifications.

The ROG Phone II is the successor to 2017’s ROG Phone, a gaming smartphone that features a 90Hz display, a Snapdragon 845 chipset and accessories that could turn the ROG Phone into a dual screen device or a Nintendo-Switch like gaming handset.