Unreleased Rotom Phone features a Pokédex and a notch 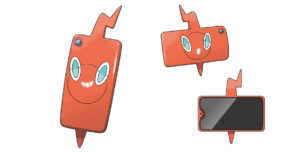 Nintendo’s Pokémon-themed Direct featured a lot of information about the franchise’s upcoming games, Pokémon Sword and Shield. Now we know that the titles will include Pokémon in the overworld, similar to Let’s Go, Max Raid Battles with friends, the ability to Dynamax your Pokemon and a Rotom smartphone.

That’s right! This time around, the electric/ghost type will now inhabit a cell phone — and even it couldn’t avoid the notch.

The Rotom Phone will feature the trainer’s Pokédex and trainers can attach it to their bike to allow it to move faster or travel over water. So it’s pretty much better than any smartphone currently on the market, though it sports an odd shape and blinking eyes.

The handset will cost $79.99 CAD (because that’s how much the games cost).

In Pokémon Sun and Moon, Rotom inhabited the Pokédex, and it made for a somewhat annoying partner throughout the trainer’s travels.

And hopefully, like a normal phone, you can mute the Rotom Phone.

The post Unreleased Rotom Phone features a Pokédex and a notch appeared first on MobileSyrup.