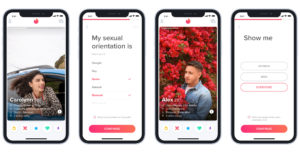 Tinder is letting users add their sexual orientation on the dating app and prioritize those with the same orientation.

In partnership with GLAAD, Tinder now lets users edit or add more information about their orientation. Now, when users edit their profile, they can tap the ‘Orientation’ option and select three terms that best describe their orientation.  These terms include, gay, lesbian, bisexual, questioning, queer, asexual, demisexual and, last but not least, pansexual.

Users can choose to show this information on their profile. They can also decide whether they see people with the same orientation first when swiping.

Tinder is rolling out this feature in Canada, U.S., U.K., Ireland, India, Australia and New Zealand throughout the month of June.